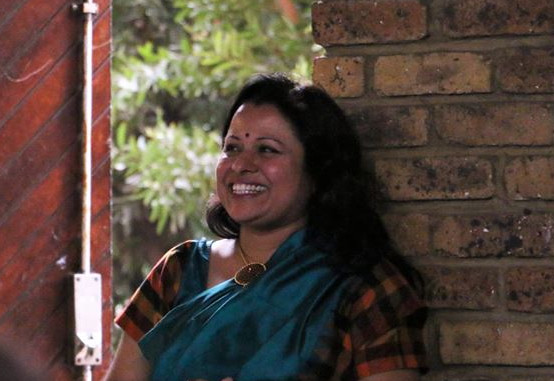 Monali Shome, an incredibly talented singer & composer, was born in the secluded serenity of her home at Dhaleswar on the eastern outskirts of Agartala, Tripura on 16th September 1975. Since her childhood she has always been inclined towards music and was inspired and encouraged by her mother, Gita Bhowmick. From her young age, she has been a consistent performer on Doordarshan (Indian National Television Channel) and All India Radio (Indian National Radio Service). But because she was raised in a highly conservative family she was never allowed to prove her talent on any LIVE stage. She is the recipient of the R.D.Burman Music Award at Kolkata . At present she is actively working towards promoting Indian Classical Music in Johannesburg, South Africa. She runs her own music academy, Drisha Music Academy, where she has around 85 students. She is an integral part of the Indian Consulate, Johannesburg – SA where she offers free music lessons to the local people from different communities, thereby promoting Indian classical music.

The initial Years
She started learning music as early as 5, where she used to learn from her mother. She was like a child prodigy where she used to pick up songs very easily. She was introduced to harmonium very early in her music career and she used to play it with utmost ease. She went on to train in classical and light music along with her studies. She has always been a topper throughout her academics career. She stood first in Tripura Board of Higher Secondary Education, 1993. Along her studies she was a constant performer on the Doordarshan (Indian National Television Channel) and All India Radio (Indian National Radio Service). Since she belonged to a highly conservative family, she never had the opportunity to showcase her talent in Live performances or stage shows.

Academics & Personal Life
Monali has completed Honours graduation in Political Science from the esteemed Calcutta University, India. During her college days she was a regular award winner in any college musical shows. Straight after when she enrolled for her Masters Degree, she was married to Mr Debajit Shome, Chemical Engineer by profession. This marked as the beginning of a new era in her life. He has been appreciative of her musical talent from the very beginning and has always encouraged her to pursue her goals. Through his constant encouragement and enthusiasm she rediscovered herself as an Indian Classical & Light Music singer, composer and trainer.

Performer Monali
She started performing Live shows after gaining moral support from her husband, Debajit. With her very first competition during the Live performance at Kolkata in the RD Burman Music Show, she deservedly bagged the first prize. She also performed in multiple shows organized for various cultural functions. Thereafter she moved to Pune in 2002 and was offered the position of the Lead Music teacher in the Delhi Public School, Pune. She also did multiple stage shows held for various cultural events and also in many charitable functions.

International Glory
In April, 2005, she embarked on a voyage to South Africa accompanying her husband, Debajit. She rendered voluntary service of teaching semi-classical & light music to all those who are interested in learning music at the Indian Consulate Office in Johannesburg. She also started training professionals specializing in western music and interested in light Indian music. She became so popular in such a short time that she was invited by the South African Cricket Board to perform at the Cricket extravaganza involving India & South Africa during the India – South Africa series in Dec, 2006.

Thereafter she has been a leading performer in any Indian Musical stage events, be it on the occasion of the Independence Day, or be it the Republic Day Celebrations or be it on any festive occasions like Diwali or Holi. She was amongst the legendary performers like Viku Vinayakram, L Subramanyam in the Shared History – the Annual Indian Festival in South Africa.

Recently she dazzled South Africa with her solo and duet performances along with the Sa Re Ga Ma Pa 2006 Champ – Voice of India Debojit.

Awards & Achievements
Monali has won multiple awards during her school and college days. She has completed ‘Sangeet Prabhakar’ from Allahabad University. Her first recognition as a world class singer came through the famous RD Burman Music Award in 1998, organized by Kalasangam.

In South Africa, she was referred as the ‘Nightingale of Indian Music’ during the National Hindi Eistedford Ceremony.

In recognition of her sincere commitment and endless hours of dedication towards development of Indian music for the South African Nationals, she was awarded by the Chief of Indian Mission in Johannesburg, South Africa.

Her disciple Maithili was amongst the top 14 of Sa Re Ga Ma Pa Little Champ International. Another disciple Natalie, was the first contestant of white origin in Indian reality shows, participated in the ‘Biswa Shera’ of the Zee Bangla. Monali is also actively associated with Art of Living in SA.